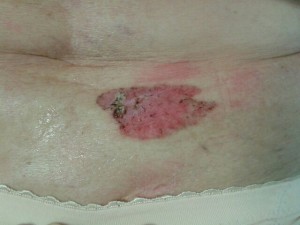 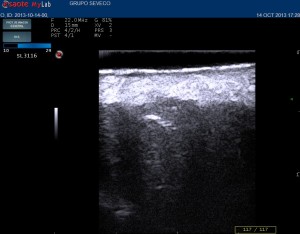 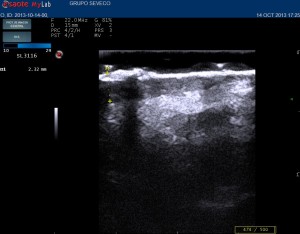 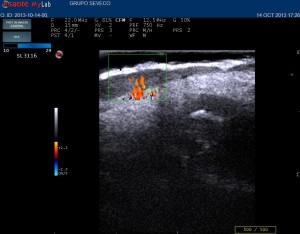 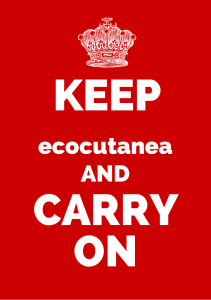 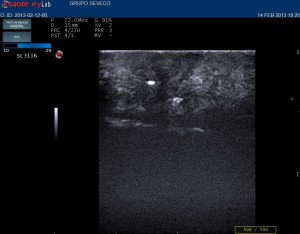 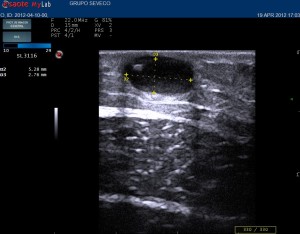 ultrasound allows us to study phenomena such as inflammation and neovascularization

which are of interest for the biology and diseases of the skin.

1) Because it is very mathematics-physics related matter (formulae fear!)

2) Because the example of ambulance siren pitch does not help much (and makes your mind go with the ambulance!)

have a different frequency (F2) from the one that was emitted.

This change in frequency (DF) is what is called the Doppler frequency. 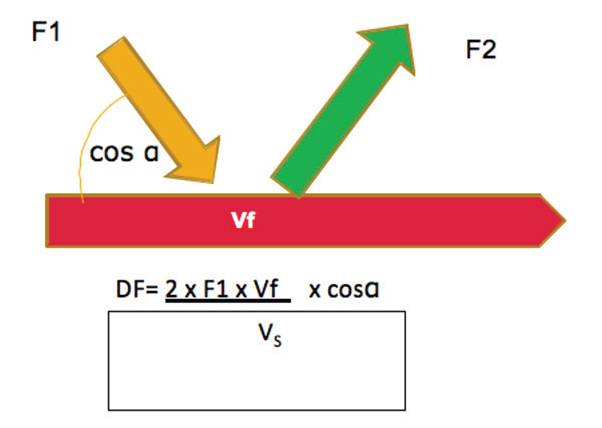 Mathematically, Christian Doppler connected all these variables in

an equation, such that by calculating the frequency change you could

determine the velocity the blood flowing in the blood vessel.

Two factors should also be taken into account: the speed of the wave

between the wave and the blood vessel (cosα).

The angle of insonation is an important factor which can influence

the determination of fluid velocity.

Insonation angles ranging from 30ºor 60º are considered to produce

Fortunately, all these parameters and calculations are performed
directly by the computer giving us immediately all the information
regarding the movement of the blood in any blood vessel.

the processing unit are represented by colors or curves known as modes.

There are three modes useful in cutaneous ultrasound:

1) Color Doppler: The speed and the directions of the fluid are coded

in colors (usually blue and red) and in color intensity, respectively, giving

us a picture of the average speed in a bidimensional image . 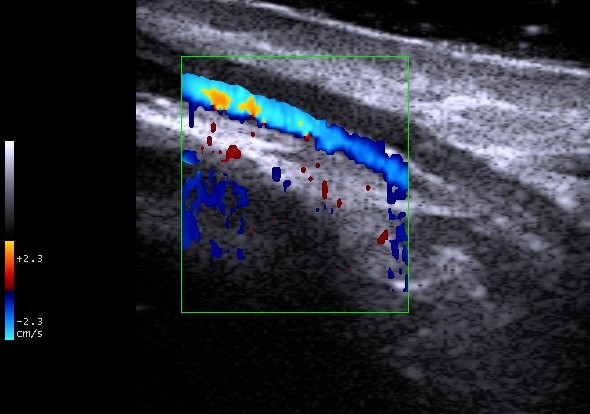 2) Power Doppler or Intensity Doppler: This is based on the intensity

It is represented by a single color (usually yellowish-orange) and

includes a visual scale of this color’s tones . It does not provide

well as the Power Doppler. 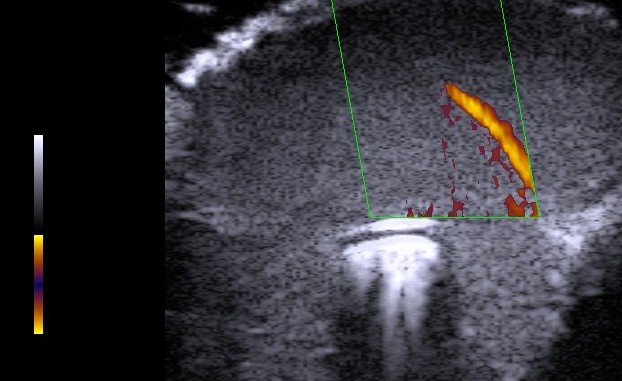 3) Pulsed Doppler: It represents fluid velocities in the form of a curve.
In this way we can measure the maximum and minimum velocity of
blood flow. 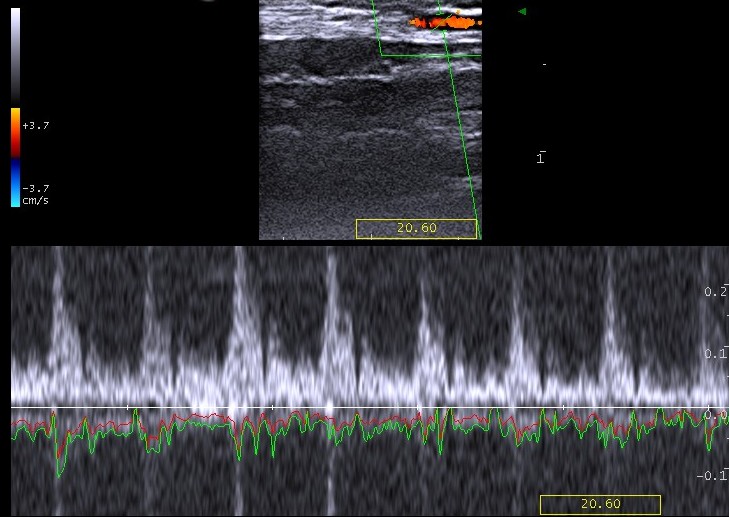 Learning doppler is an endless task: everytime I revisit my Doppler principles I find new explanations to skin vascularization phenomena. 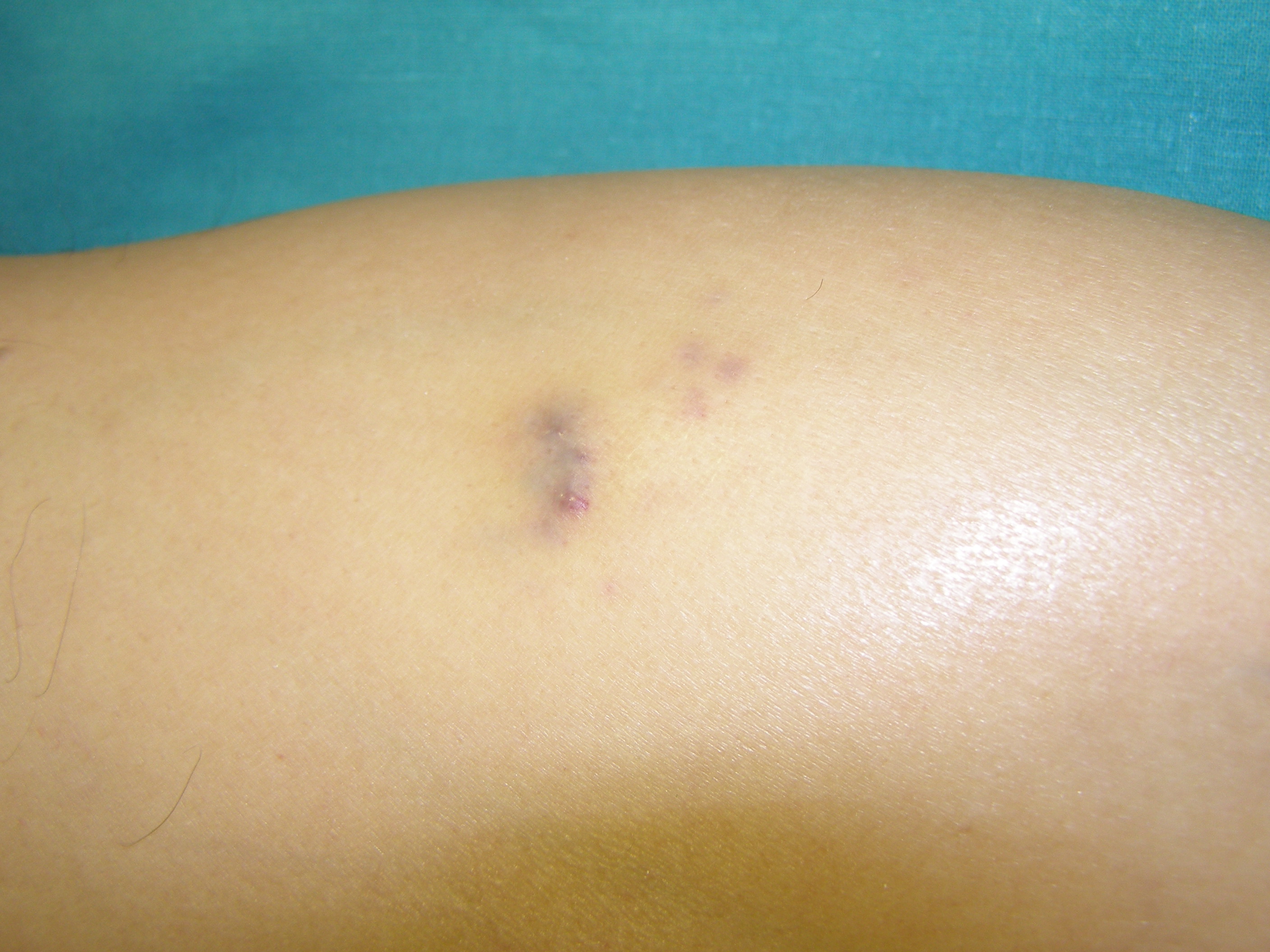 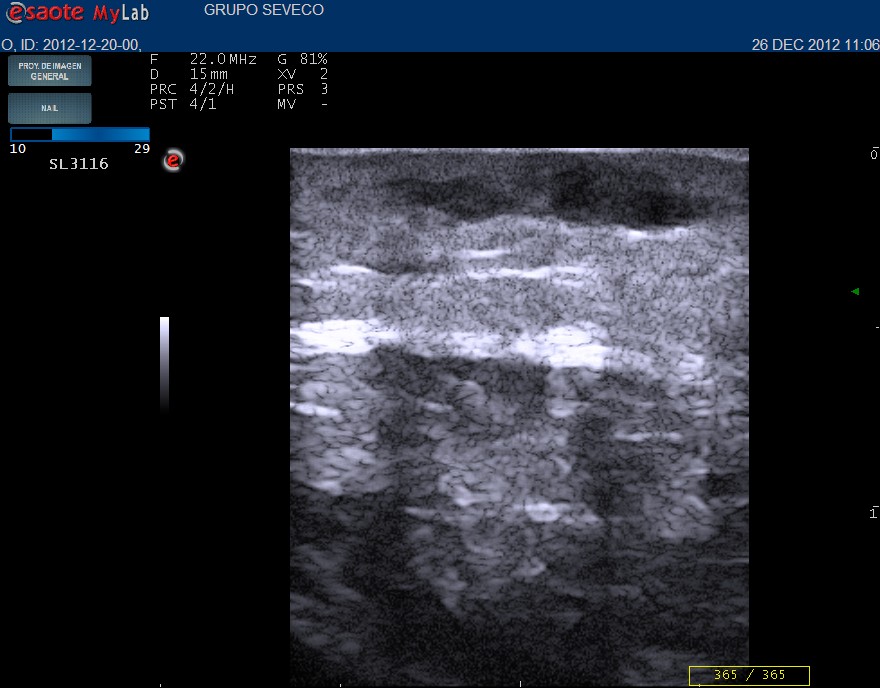 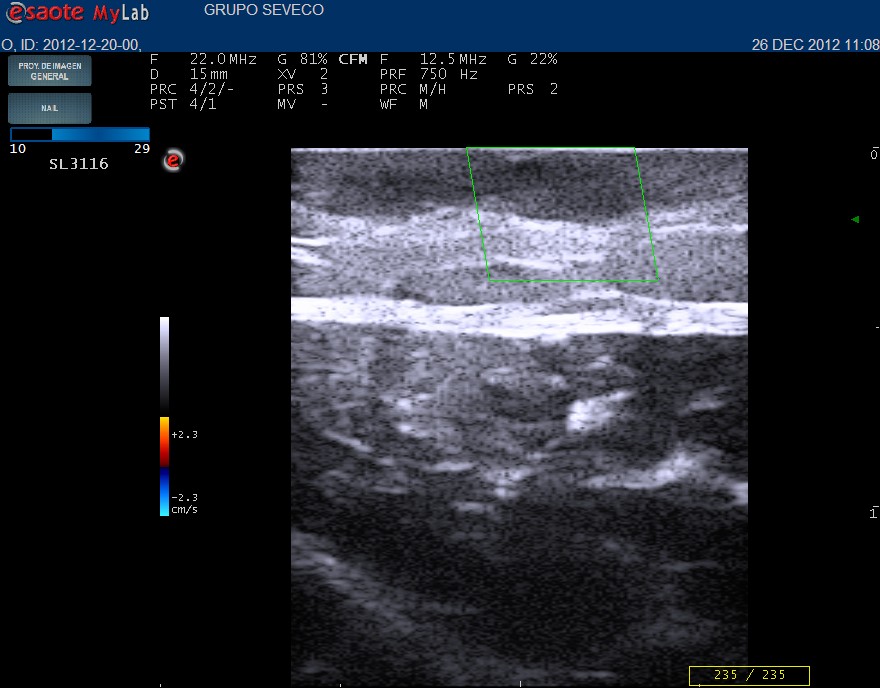 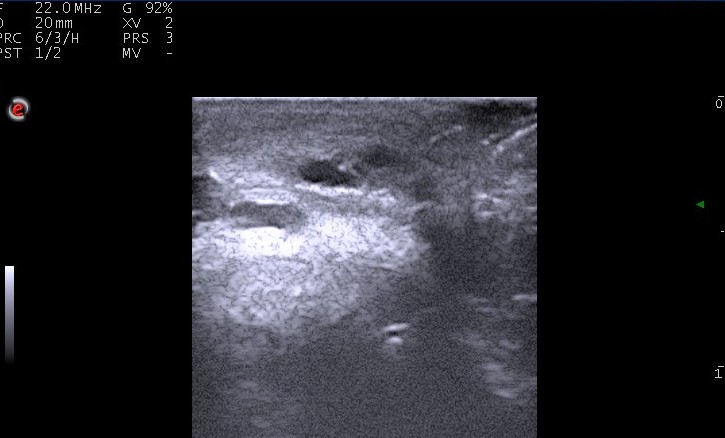 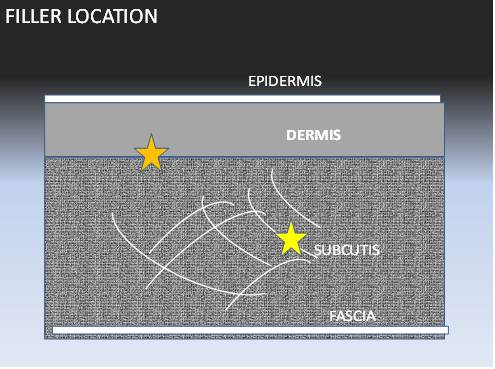 Skin  ultrasound doppler is usually difficult to perform due to three reasons:

In this post I want to offer some tips to improve your Doppler scans in  skin lesions. However, improving  Doppler means continuously learning Doppler   by performing Doppler scans. 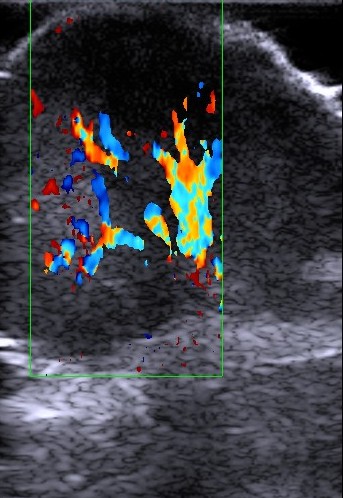 1. Use a large amount of gel and avoid using pads that press the vessels.
2. Get first  a good image of the structure under study in B-mode.
3. Select Color or Power Doppler depending on flow direction information necessity.
4. Adapt the size of the visualization window to the vessel.
5. Set PRF starting from 750 KHz
6. Adjust Doppler time-gain to the point immediately preceding the flare artifact.
7. Acquire images in several moments as flow changes with time. (see post on New technologies for flow measurement)

8. In skin lesions insonation angle does not influence usually presence of flow as vessels are so small and arborizing that flow is usually present if present.

However keep angle for comparisons.
9. If performing Pulsed Doppler (avoid it when doing scans that involve long exposures because it produces heat) select and position gate  on the center of the vessel.
10. Perform the necessary measurements on the frozen spectrum.

Skin ultrasound is a valuable tool assessing  aesthetical dermatologic conditions as it provides objective  data on pathology and treatment evolution.

Red striae are comsequence of rapid growth in volume and «breaking» skin tissue, therefore, they are frequent in adolescence,  pregnancy and pathological states as Cushing Syndrome.

Red color in striae is consdered as a sign of on going process and a possibility of prevention of chronification ( white striae) is stil possible with skin care with several topical preparations  rich in E vitamin. 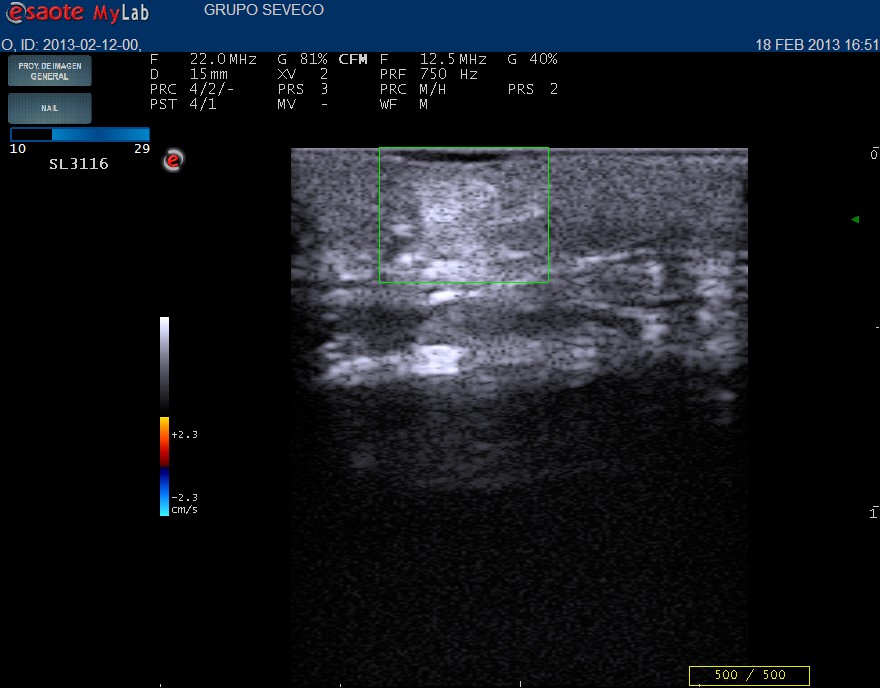 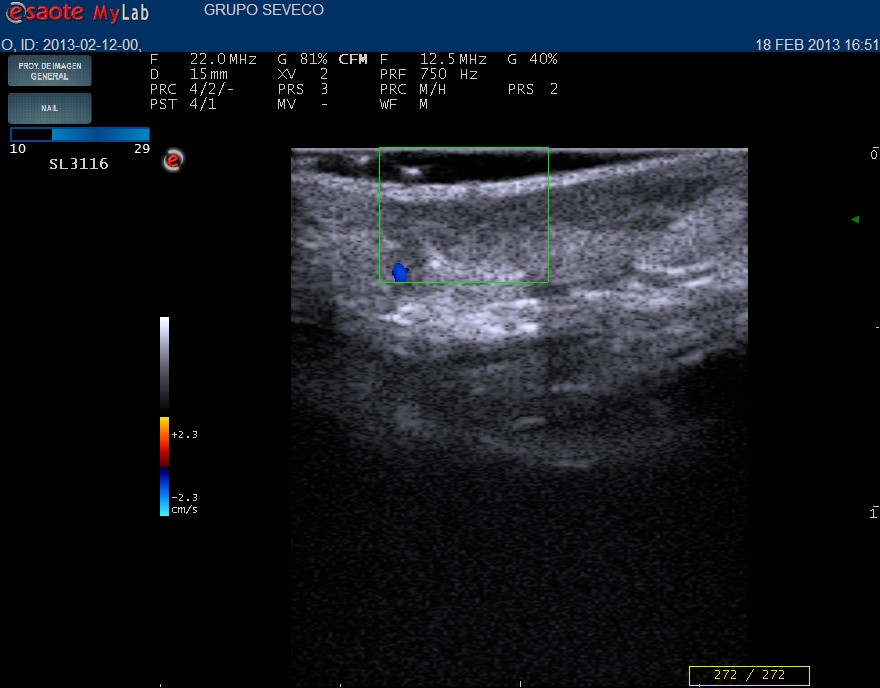 As above discussed treatment of strie is mainly preventive and  most interventions are not  solid scientifically based.

Skin ultrasound of striae may be an interesting assessment tool in the present and future treatment of this difficult to treat aesthetic skin alteration. 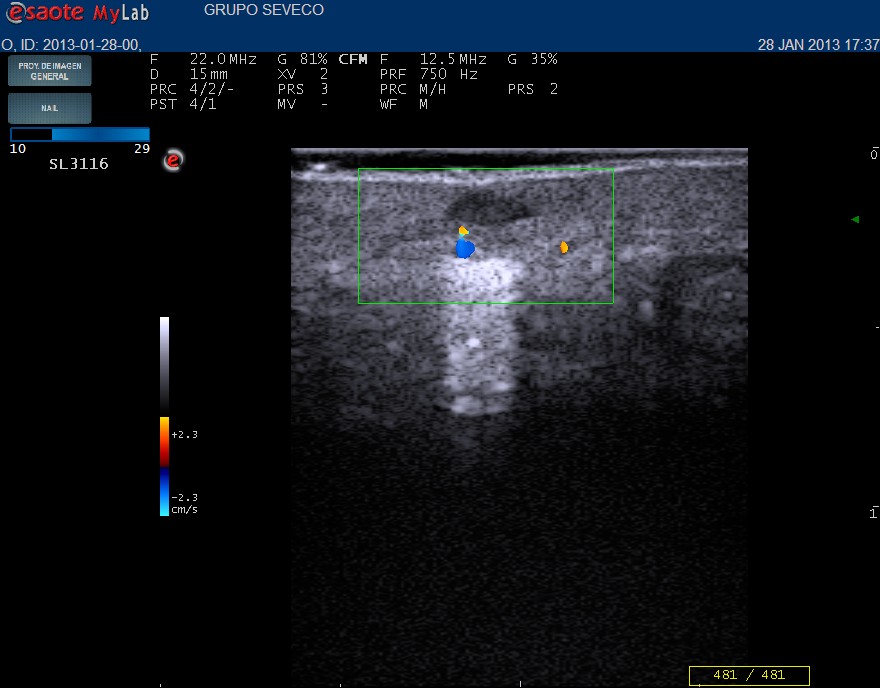 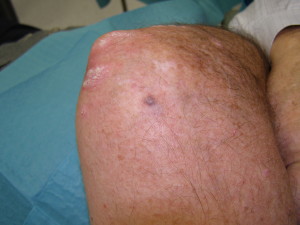 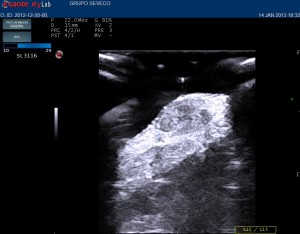 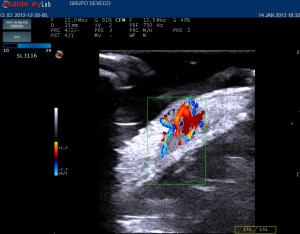 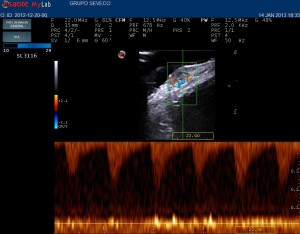